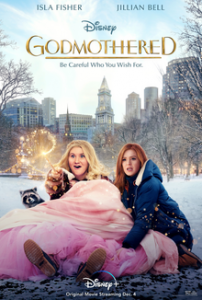 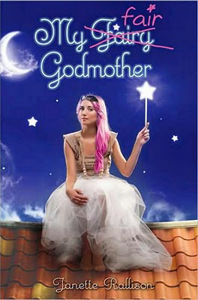 I admit I put off watching the movie Godmothered, because I knew after I watched it I was going to feel sick. And who wants to ruin a perfectly good night? But my husband finally insisted we watch it.

Anyway, I thought I would list the similarities I noticed between Disney’s movie and my series. It’s been years since I read the last two books, so I may be missing some things. (And I know Disney read My Fair Godmother because it was pitched to them more than once.)

Ditto for Godmothered.  (But Chrissy has more sass than Eleanor.)

Chrissy goes to modern-day “damsels in distress“ who don’t believe in fairy godmothers and question their sanity when they meet her.

The role of magic is discussed: Do people still believe and need it?

My Fairly Dangerous Godmother has a teen girl character who has an amazing voice but is so nervous when she sings in front of people that she projectile vomits. She gains confidence during the novel and sings her big number perfectly at the end of the novel.

Godmothered has a teen girl character who has an amazing voice but is so nervous when she sings in front of people that she projectile vomits. She gains confidence during the movie and sings her big number perfectly at the end of the movie.

In My Fair Godmother, the main character’s sister’s name is Jane

In Godmothered, the main character’s daughter’s name is Jane.

In my Unfair Godmother, since Chrissy hasn’t become a real fairy godmother yet, she’s been forced to take a part-time job as a tooth fairy, something that is beneath her.

In Godmothered, when the fairies discuss not being able to become fairy godmothers, they worry that they’ll end up having to become tooth fairies instead.

In My Fair Godmother, Chrissy whips up a ball gown for the character when the character doesn’t want it. It’s sort of a running joke in the series.

In Godmothered, Eleanor whips up a ball gown for a character when she doesn’t want it.

In My Fair Godmother, most of Chrissy’s magical help just makes matters worse.

In my series, it’s clear that Chrissy is helping out her charges because of self-interest–to help her become a real fairy godmother, and her charges call her out for it.

In Godmothered, it’s clear that Eleanor is helping out her charges because of self-interest–to help her become a real fairy godmother, and her charge calls her out for it.

In My Fair Godmother, Chrissy can’t find a pumpkin and so turns a squash into a carriage.

In Godmothered, Eleanor doesn’t have a pumpkin and so turns a watermelon into a carriage.

My Fair Godmother has a main character (Chrissy’s assistant, Clover) whose last name is BloomsBottle.

In My Unfair Godmother, Chrissy’s assistant is checking to make sure the heroine is presentable in her gown and says, “Your hair is fashionably done. Check. Wearing a stunning gown. I guess so, if that’s the sort of thing you like.”

in Godmothered after Eleanor creates a ball gown for Jane, she says, “Perfect outfit, check.”

In my series, Chrissy’s headmistress was not happy with her assignments.

In My Fairly Dangerous Godmother, one of the main characters is from Hamilton, Ohio.

So coincidence? I think that’s statistically unlikely.
To tell you the truth, I don’t know if these similarities were the writers’ way of nodding to my series’ fans or whether the similarities crept into the screenplay subconsciously because the writers had read my series.

Whatever the case, the result is that studios who may have been interested in my series may now not be interested because my stories will now look like they’re copying Godmothered.

Godmothered differed in a lot of ways from my series. Instead of time traveling to medieval times to relive fairytales, the writers took a page (or more) from Enchanted and revisited a lot of things from that movie: an innocent young woman comes to the cynical big city, doesn’t even know what money is or how relationships work, and the protagonist takes her in out of pity. Woodland creatures help with housework.

I’ll also admit that there were some cute things in the movie. I laughed at the raccoon and the blonde reporter. I didn’t find the end all that satisfying, though, because it seemed to be more of a statement than an ending.

We read and watch stories because we want a happily ever after. If we wanted to be reminded that endings don’t always turn out the way we want, we’d watch the news instead.

Here’s the hard thing for me, though. I’d always planned on writing a fourth Godmother book. It’s partially plotted already. But there’s just something that feels really violating about having your ideas taken this way without any sort of consideration or acknowledgment. (I’m already wondering if someone is going to come out with a TV series about modern teenagers who fight dragons.)

If I tried to write the fourth book now, instead of enjoying spending time with my character and the fairy world I created, I’ll be dealing with those feelings of violation.

So… that book is going to be on hold for a while. Maybe for good.