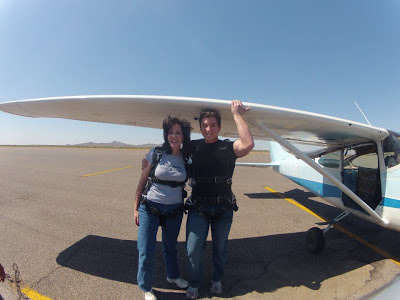 I hate getting details wrong in my books. This may not be entirely apparent since I have more than once gotten details wrong in my books, but I really do a ton of research.
In Slayers: Friends and Traitors (due out in October) I have characters jump out of a plane, and I decided it would be a good idea if I went skydiving so I could write a more authentic scene. I didn’t think it would be too frightening since a large amount of people skydive every year. I figured, hey, people pay a lot of money to skydive so it’s probably even fun.
That was my first stupid assumption. People are idiots and you should never do something just because a lot of people pay large amounts of money to do it. Case in point: golf.
So I booked an appointment, went to the airport, and signed the twelve page waiver that detailed all the hideous ways I might die.  This was my favorite part: 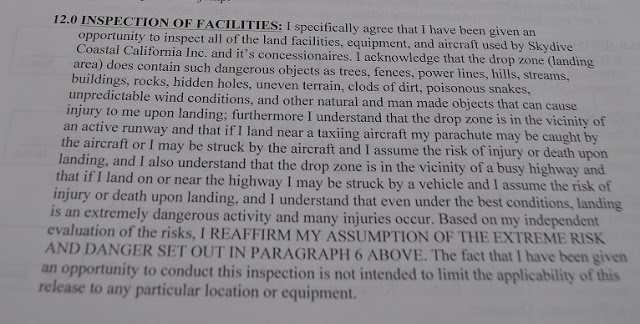 Basically it says I may be struck by passing aircraft, hit by vehicles on the ground, or may run into trees, buildings, or poisonous snakes.

I still wasn’t all that nervous because I knew I was going to be strapped to an experienced instructor. He was not likely to skimp on parachute inspection or whatever, because he didn’t want to die any more than I did.
Then I met my instructor. He was a twenty-three year old guy who I suspect had no sense of his own mortality. I became a little nervous.
He took me to a small plane that sounded like a lawn mower and seemed to be held together with duct tape, super glue, and erector set pieces. I was a little more nervous, but I was still okay because I figured the pilot had been flying the plane for quite some time so he had a lot of experience doing important things, like not dying. 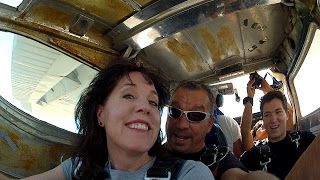 We took off, gained altitude, and putted around in the sky for several minutes. I was now more nervous and cursing myself for ever switching from writing romantic comedies to action novels. Really, when you come right down to it, it would be fine to write a book about boring people who never do anything dangerous.
And then the plane door opened.
At that point a spike of terror hit me. I realized that people are born with several strong survival instincts and one of them screams: DO NOT JUMP OUT OF A PLANE! IT WILL KILL YOU!
I said many things at that point, all of which my twenty-three year old instructor ignored as he dragged me out of the plane.
And then we were falling through the sky. 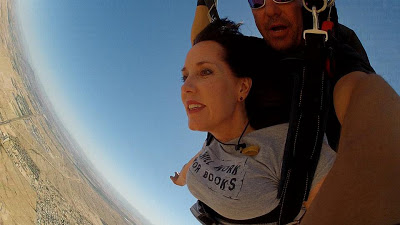 Falling at around 130 miles an hour was like standing in a wind tunnel. All I heard was the wind screaming by. I couldn’t even tell I was falling because nothing around me was moving. Then the parachute came out and I glided through the air at a gentle 15 miles an hour. It did feel like flying then and was really fun—especially when we did spins. Spins are the best.
I landed and felt great.
This would normally be the end of the blog except for one thing.  Later that day I got a call from the skydiving company telling me that their computer crashed. (I guess this is better than hear that their plane crashed.) They had unfortunately lost all the pictures of me but they would let me skydive again for free if I wanted to reschedule.
Well, at that point I was still thinking about how fun the last part of skydiving had been and not the terror of the ominous open-plane-door-moment, so I not only rescheduled, I decided to take my teenage son with me. (Yep, these are all pictures from the second jump.)
This dear readers just proves that there is no cure for stupidity. Because there is only one thing more terrifying than being in a plane when the door opens and you know you’re going to plunge out of it. And that is: being in a plane when the door opens and you know your child is going to plunge out of it. 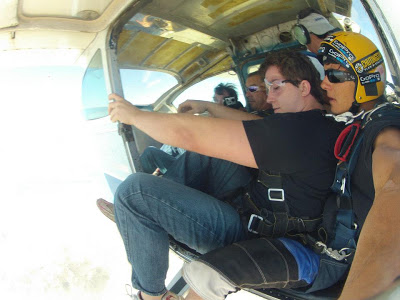 I do not recommend this as an after school activity.
When I went out of the plane the second time, I wasn’t looking for sensory details to use in my novel. I was searching the horizon to make sure my son’s parachute had opened.
It had. 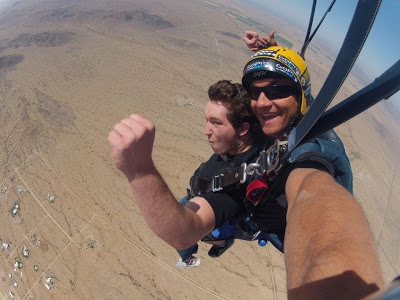 And when you all read the skydiving scene in Slayers: Friends and Traitors I hope you appreciate my diligent research. 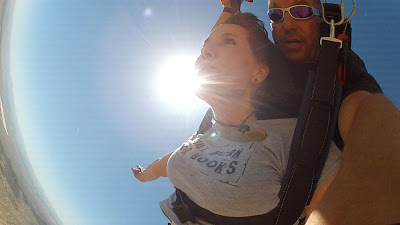