Finding your one true love can be a Grimm experience!

After her boyfriend dumps her for her older sister, sophomore Savannah Delano wishes she could find a true prince to take her to the prom. Enter Chrissy (Chrysanthemum) Everstar: Savannah’s gum-chewing, cell phone–carrying, high heel-wearing Fair Godmother. Showing why she’s only Fair—because she’s not a very good fairy student—Chrissy mistakenly sends Savannah back in time to the Middle Ages, first as Cinderella, then as Snow White. Finally she sends Tristan, a boy in Savannah’s class, back instead to turn him into her prom-worthy prince. When Savannah returns to the Middle Ages to save Tristan, they must team up to defeat a troll, a dragon, and the mysterious and undeniably sexy Black Knight. Laughs abound in this clever fairy tale twist from a master of romantic comedy. 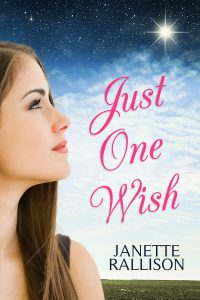 Seventeen-year-old Annika Truman knows about the power of positive thinking. With a little brother who has cancer, it’s all she ever hears about. And in order to help Jeremy, she will go to the ends of the earth (or at least as far as Hollywood) to help him believe he can survive his upcoming surgery. But Annika’s plan to convince Jeremy that a magic genie will grant him any wish throws her a curveball when he unexpectedly wishes that his television idol would visit him. Annika suddenly finds herself in the desperate predicament of getting access to a hunky star actor and convincing him to come home with her. Piece of cake, right? Janette Rallison’s proven talent for laugh-out-loud humor, teen romance, and deep-hearted storytelling shines in a novel that will have readers laughing and crying at the same time.

Boyfriends are supposed to be loyal, caring and handsome. Giovanna’s boyfriend Jesse may have the last two down, but he’s seriously lacking in the loyalty department. When her twin brother, Dante, runs for student body president, Jesse campaigns for the opponent. In the heat of the moment, Giovanna dumps Jesse and becomes Dante’s campaign manager. But she almost immediately regrets her decision. Beating the mayor’s son at school politics and winning her boyfriend back are going to take a lot more risk than Giovanna ever dreamed she’d take.

Chelsea’s school year has taken a turn for the worse. After being dumped by her boyfriend and humiliated at the pep assembly by her younger sister’s boyfriend, Rick, she’s just concentrating on avoiding any other major embarrassments. That’s when Rick and his band debut their new album, complete with a whole set of songs bashing cheerleaders. Chelsea’s humiliation has reached a whole new level now that everyone is walking down the halls singing the words to “Dangerously Blonde.” It’s time to make Rick pay. All he wants is to win the High School Idol audition, so he can be on his way to rock star fame and fortune. But with the help of her best friends, Aubrie and Samantha, Chelsea is going to steal his victory right out from under him. The characters from All’s Fair in Love, War and High School are back, only this time it’s payback.

A PC school principal turns West Side Story into a comedy of errors. Sixteen-year-old Jessica dreams of Hollywood fame, and when Jordan moves into her small town, she dreams of him, too. He’s a movie star’s son, and hey, he’s gorgeous to boot. Jordan has always wanted to get out from the shadow cast by his superstar father, but now that he and his mother have moved so far away from LA, how can he get his divorced parents back together? Jessica convinces Jordan the way to get his father to come for a long visit is to be a part of the school play. And if she’s “discovered” in the process, all the better. Things go wrong when she lets Jordan’s secret identity slip, and grow even more disastrous when the principal tries to change West Side Story into a gang free, violence-free, politically correct production. In the same romantic and sharply witty spirit of Life, Love, and the Pursuit of Free Throws, Janette Rallison delivers another comic gem that teen readers are sure to love. 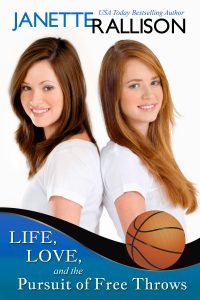 Going head-to-head with your best friend is never easy, on the court or off. Josie loves hottie Ethan Lancaster, the captain of the basketball team, but she never can do or say the right thing in front of him. So how can it be fair that Ethan is only interested in her best friend, Cami, when Cami isn’t even trying for his affection? Or is she? Cami dreams of winning her basketball team’s coveted MVP award, and earning the chance to take the court during a special halftime demonstration with WNBA star Rebecca Lobo, but her best friend, Josie, is a better player. So how can it be fair that Josie is a shoo-in for the honor if she is barely interested in basketball in the first place and isn’t even trying to be the best? Or is she? Told from two points of view, this novel of freshman life, love, and the pursuit of free throws displays the same delightful humor as Playing the Field and All’s Fair in Love, War, and High School. As sports become a more integral part of girls’ lives, it’s important to see this experience reflected in teen fiction. Following on the heels of the success of All’s Fair in Love, War, and High School, and accompanied by the paperback release of Playing the Field, Janette Rallison hits the mark again with a third wry, witty, romantic comedy. The climax of the story features a cameo appearance by real-life WNBA superstar Rebecca Lobo.

A Young Adult Novel. Shopping for love can cost a girl her dignity. Charlotte has a job as a perfume spritzer in the local mall—a perfect job for spying on her classmates who hang out there. But when she sees her best friend’s boyfriend flirting with another girl, it begins a series of hilarious, often-foiled attempts to catch him in the act of cheating. Whether she’s eating table centerpieces at the country club, or setting the winter dance aflame (literally!), it seems like the only place she can be inconspicuous is at the mall. Through it all, the gorgeous and infuriating Colton is there laughing at her. But when she and Colton dress up as Santa and his elf for a school service project at the mall, they get more attention than they bargained for—leading to a mall brawl, a moment of truth, and the realization that being right isn’t always a one-size-fits-all solution.

A Teen Novel. Sixteen-year-old Samantha Taylor is used to having things go her way. But when she tanks the SATs, her automatic assumptions about going to college don’t appear to be so automatic anymore. She determines that her only hope for college admission is to win the election for student body president. When her current boyfriend dumps her less than three weeks before the prom, Samantha is determined to win the election and find a dream prom date, no matter what it takes. After all, all’s fair in love and war—and high school!