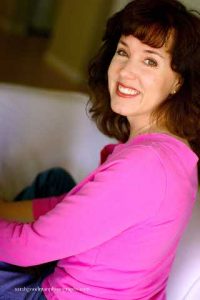 Janette Rallison is old. Don’t ask how old, because it isn’t polite. Let’s just say she’s older than she’d like to be and leave it at that.

Janette lives in Chandler, Arizona with her husband, five children and enough cats to classify her as “an eccentric cat lady.” She did not do this on purpose. (The cats, that is; she had the children on purpose.) Every single one of the felines showed up on its own and refuses to leave. Not even the family’s fearless little Westie dog can drive them off.

Since Janette has five children and deadlines to write books, she doesn’t have much time left over for hobbies. But since this is the internet and you can’t actually check up to see if anything on this site is true, let’s just say she enjoys dancing, scuba diving, horse back riding and long talks with Orlando Bloom. (Well, I never said he answers back.)

So you’ve decided to do a book report on me or one of my books. Congratulations! You are obviously a person with impeccable literary taste.
I’ll try to address some of the common questions I get from book reporters (generally the night before the assignment is due).

Where did you grow up?
A wonderful small town called Pullman, Washington, which is why most of my books are set in small towns. I love them. (Bonus trivia point to impress your teacher: All’s Fair in Love, War, and High School; Revenge of The Cheerleaders; and Blue Eyes and Other Teenage Hazards are all set in Pullman.)

How do you chose the locations for your books?
I set Playing the Field in Gilbert, Arizona, because that’s where I lived at the time. It’s easy to write about places you know well. But since I couldn’t set every story in Gilbert, I branched out to other warm climates. Most of my stories take place in Arizona, New Mexico, California, Nevada, and Texas.

I try to stay in warm climates because quite frankly I’ve lived in Arizona for so long I’ve forgotten what the cold is like. When I first wrote about Washington I almost had a scene where people mowed the lawn in December. Oops.

Where do you get your ideas from?
I have a teenage daughter, which is sort of like living in your own reality show, but with fewer commercials. I borrow from her life a lot. In fact while I was writing It’s A Mall World After All I once lifted dialogue for a scene right off the text message log in my daughter’s cell phone.

Has any of the stuff you’ve written about ever happened to you?
Unfortunately yes, but generally only the parts where characters are making fools of themselves. I did that a lot as a teenager. I don’t think there’s such a thing as an easy or graceful adolescence. It’s all about embarrassing yourself.

Will any of your books ever be turned into movies?
Authors have very little say over that sort of thing. (Ditto for the book covers.) But if I hear anything, I’ll let you know.

Is it true that when you were thirteen you had a massive crush on Apollo from the original series of Battlestar Galactica?
Oh, yes. 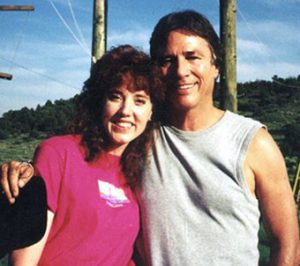 Janette with Richard Hatch; the man who lived, in poster form, all over the walls of her teenage bedroom. (Don’t ask what lived on the floor, in the corners, or under the bed. Janette wasn’t one of those clean teenagers.)

P.S. If your teacher asks you to identify symbolism in my books you have my permission to tell him/her that I didn’t put any in.
If your teacher asks about theme, tell her/him that the book is about forgiviness. Unintentionally, most of my books are. I didn’t even realize this until the last book. My husband asked me what the book was about (I think he asks these questions so he doesn’t have to actually read my books.) I told him, “On a basic level it’s about realizing when you’re wrong, and about forgiveness.”
He said, “Wasn’t that what your last book was about too?”
“Um, yeah.”