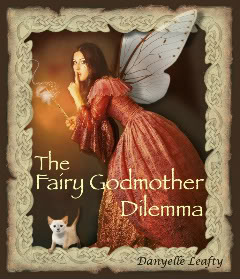 I met Danyelle Leafty at a writer’s conference a couple years ago. A few days ago her husband emailed me and asked if I would like to interview her on my blog. I have to say I was impressed her husband was actively promoting her. If I had known I was going to be an author, I would have questioned all my boyfriends about their willingness to set up interviews for me. Alas, I didn’t have the foresight to ask that important question.

Anyway, I decided to do something different for this interview. You’ve all read lots of interviews with authors. By this point you know about our creative quirks, our into-the-night writing sessions, our despair at rejection letters, and you know about those times we forgot to pick up our children from (fill in the blank) _________ because we lost track of time while writing that awesome love scene. But have you ever heard an interview from an author’s husband–from those poor folk that have to deal with us? Neither have I, so this interview should be interesting.

Without further ado, here is Jadean Leafty, husband of Danyelle Leafty, author of The Fairy Godmother Dilemma: Catspell. We’ll be giving away one of her ebooks to a lucky commenter on the blog.

When did you realize Danyelle was a writer, and by then was it too late to do anything about it?

I am told that I should’ve realized it a lot sooner than I did. I have a bad memory. I first realized that she was a writer when I went off gallivanting with a bunch of freshly graduated high school kids in Texas. Which is also when I was being yelled at by men in uniform to whom I was their senior in age by quite a few years. Pretty much while I was away at basic training. I knew it was serious though when I was deployed to Afghanistan. Of course by then it was too late, but I wouldn’t trade her.

I once spent ten days dragging my husband around England to research castles for a novel that I still haven’t written. Has Danyelle ever dragged you into her research, and if so what did you have to do?

If by research, you mean the book store. YES. She doesn’t have to really drag us anymore. Our six year old gets put out when we don’t take the turns that would end us up at Barnes and Noble.

When I was writing romances, my husband once accused me of fantasizing about other men.
“Yeah,” I said, “but I’m getting paid to do it.” Then for my next romance I put my husband in the book as the hero. (What the Doctor Ordered) Which would have been a really sweet gesture if I hadn’t fired him from my romance four days later. My husband is too easy-going and he just wouldn’t argue and banter with the heroine. (Who incidentally was me. I did not fire myself from the novel as I am quite good at arguing and bantering.) Have you shown up in any of Danyelle’s books?

Bits and pieces of me do. The whole me has been in each of her dedications thus far. Usually some aspects of me are found in her prince charmings. I’m still trying to devour Catspell. But I have to fight the children for it. So reluctantly, I sneak chapters in while at church.

I am pretty sure that classifies as a sin–or true devotion to your wife. Either way, you are clearly a supportive husband. Do you read your wife’s drafts and offer suggestions?

Of course, time permitting. I have a keen eye for line editing. Heck, I even find mistakes in her “research” books.

Does she take kindly to your comments?

If they are valid, yes. She’s always right.

Any last advice for wives who are authors?

Love the author. And even though she calls you biased don’t believe it, her books are the BEST!

Those are words every author’s husband should learn. Remember to leave a comment for a chance to win. To find out more about Danyelle you can go to her website at: http://www.danyelleleafty.com/