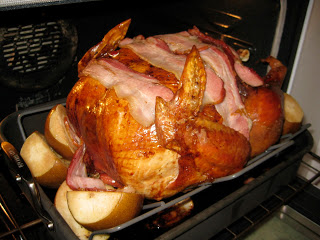 If you’re a writer in 2010 you have a lot to be thankful for. Here on Thanksgiving Day I thought I’d provide a list of the top ten reasons to be glad.

1)The computer.
Can you imagine writing out your manuscript by hand? And then having to rewrite it every time you made a change? I shudder at the thought. Typing it on a typewriter wouldn’t have been much different. No wonder Jane Austen only wrote six books. I’ve been writing for fourteen years and I’m writing book number nineteen right now. Thank heavens and all those geek inventors who came up with the computer.

2)Spell check.
It keeps us from looking like total idiots in front of our editors. (There are enough other ways to look like an idiot in front your editor. Not knowing the difference between hay and straw comes to mind.)

3)The Internet.
Not only does the Internet make it easy to send off your manuscript. (Who wants to wait in a line at the post office and pay postage for every draft?) It connects us to other writers. When my first book was accepted for publication in 1995, I didn’t know a single other published author. I had no one to ask about contracts or marketing. Now I’m on lists with over a hundred different authors. When I needed a new agent, I asked for recommendations and within minutes had answers.

4)YouTube.
Seriously, YouTube has been a blessing for researching things. Because—for some bizarre reason that escapes me—people out there have a desire to put every event and mundane task up on the Internet. When I needed to know how to use a spinning wheel, I found it on YouTube. When I needed to know what it looked and sounded like to shoot a rifle, it was there. Ditto for different martial arts moves, horse jumping, arrow shooting distances, and what sort of ground cover was in the Shenandoah forest.

5)Wikipedia.
If you need the facts on just about anything (like how many books Jane Austen wrote), it’s there. Before the Internet, it took weeks to research things that I can find out in seconds now.

6)A literate population.
Granted, they had cool clothes, but it would have been pretty darn hard to make a living as a writer during the Middle Ages.

7)Laptops.
I can write anywhere now—even in the comfort of my bed. (Well, I would be able to write anywhere if my cat didn’t think the keyboard was an appropriate place to sit on.)

8)We’re not censored.
Oh, I know authors are crying censorship all of the time, but what they mostly mean is: “Hey, somebody decided not to buy my book for their school!” If that’s the case, I should be on the banned list because apparently there are a lot of schools out there that don’t buy my books. (Although mostly it’s just because they’ve never heard of me.) Nobody is telling publishers that they can’t print our books, or stores that they can’t carry our books, or shoppers that they can’t buy our books. If you want to know what real censorship is, try to set up a printing company in a middle eastern or communist country and see how far you get.

9)E-books.
Actually I have mixed feelings on this one, but I can’t deny that it’s a good thing that you can buy books instantly from your computer or that authors can put up their backlists.

10)Weird people.
With the amount of wackiness out in the world, we’re never going to run out of ideas.