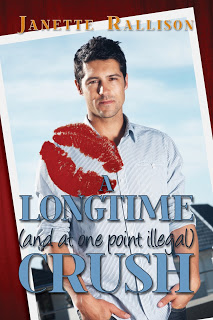 Remember, like, three weeks ago when I said I would be putting up a couple of ebooks in a week? Well, that was proof that I’m overly optimistic about my to-do list. You would think that after living with myself for forty-some years I would know some basic facts:

1) No matter what my intentions at the store, I won’t send in the rebate form.
2)  I also won’t turn in my receipt to the Boy Scout adviser, Achievement Day adviser, conference committee, or any other place that I’m supposed to turn in a receipt so I can get reimbursed for whatever I just bought for said groups.
3) I won’t have just one cookie. I will eat as many as it takes to make me wonder if there should be a reality show about people with no willpower.

And most importantly 4) Everything takes more time than I first thought it would. (This is also why I’m frequently late for things.)

Anyway, my romance novella, A Longtime (and at one point illegal) Crush is finally up at Amazon. (Techno-Bob put it up last night at midnight so it would be available for Valentine’s Day, and he made some mistakes, such as putting the parenthesis in the wrong place and putting the author’s note where the book description should be. I fixed those this morning, but it will take awhile for Amazon to update.)

It’s only 62 pages, but I must say they are good pages. In fact, I sort of have an author crush on Kye–which is entirely inappropriate since I’m about twenty years older than him.

From the day Elsie’s older brother brought his friend Kye McBride to their house, Elsie adored him.  When she was eight she secretly blew kisses to him. When she was twelve she sat on the stairs, unnoticed, and watched him escort another girl to prom. When she was a senior in high school, she walked into math class and found out he was her new math teacher.
With that much emotion fueling her, things were bound to go wrong. And they did. Elsie not only spent her last two weeks of school avoiding him, she turned avoiding-Kye-at-all-costs into her life-long philosophy.
Now three years have passed and Elsie has come home for her brother’s wedding.  She’s got to face Kye –hopefully without getting crushed again.