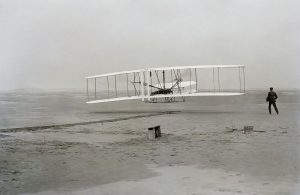 I’m listening to the book The Wright Brothers by David McCullough. I have to admit that I’ve developed an odd across-time crush on Wilbur. Okay, maybe crush isn’t the right word. I just want to hang out with him. He was not only brilliant, he had such impeccable character. And he was a good writer. It’s probably for the best that time travel isn’t possible. I would be some annoying fan girl trying to win his approval.

Anyway, that’s not the point of this post. The point is that I’d never realized before how hard it was for Orville and Wilbur to invent the airplane. I won’t relate all of their trials, but one year at Kitty Hawk they were deluged by swarms of mosquitoes so thick they had to wrap up  in blankets in the sweltering heat. They alternated between sweating and being eaten alive for a couple of days.

See, if  it were up to me, dreams of the airplane would have died right there. I don’t do swarms of hungry mosquitoes.

In the first years after they’d invented the airplane, the government ignored their attempts to sell it and the press accused them of lying about it. They ran into wall after wall for a long time.

I don’t know why this surprises me. I guess I figured that for some people success is easy. But easy success seems more often to be the exception than the rule. For most of us, we’ve got to face the metaphorical mosquitoes.