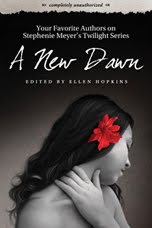 As you die-hard Janette Rallison fans know, (Hi Mom!)a year or so ago I wrote a chapter for the book New Dawn, which is a compilation of essays about the Twilight series.

Teen Libris sent me a copy to give away, so if you’re one of those people who can’t get enough Edward and Jacob, (And really, who can get enough of hot guys with super powers?) then leave a comment and at the end of the week I’ll list a winner.