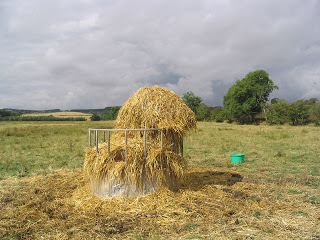 Actually, you don’t need to know the difference between hay and straw, and I’m hoping you think they’re interchangeable. That way you won’t notice the glaring mistakes in the ARC of My Unfair Godmother.

So call me a city girl—I’ve never dealt with either plants, and when I was putting my own spin on the story of Rumpelstiltskin I called the straw hay half the time. I even had a couple characters wonder what the horses would eat if all the straw in the kingdom were turned into gold.

About half of you are laughing right now because you know horses don’t eat straw. Now that I’ve done a little research, I know that pretty much nothing eats straw because it has no nutritional value. This is probably why people in the Middle Ages used it to stuff mattresses and for bedding in the barn. (I did know that much.)

In my defense, Rogert’s Fourth Edition Thesaurus lists straw under the food category and there’s that scripture in Isaiah about the millennium that says the lion will eat straw like the ox—which I suppose is a translation error since there’s that no-nutritional-value problem which makes straw unappealing to animals. (Although my children seem to love foods with no nutritional value.)

I’ve had two people read My Unfair Godmother and one of them told me about the straw/hay problem. I emailed my editor and told her about the issue. I thought she was going to fix it before the manuscript went to ARCs, but no, I just an ARC and the straw is hay half the time.

Anyway, this whole blog is just a preamble to tell you that next week I’m going to give away an ARC. But you have to pretend you don’t know the difference between straw and hay.