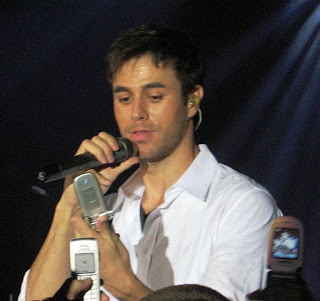 Last year I created the Enrique Iglesia Memorial Worst Pickup Lyrics in a Song Award. The award bears Enrique’s name due to his touching and romantic song:  I Want To–insert the crassest term you can think of here–You Tonight.

I’m not sure there’s enough money or fame to make that line work on most women, but apparently Enrique isn’t all that picky.

(To see the five contending songs for last years award, you can follow this link: http://janette-rallison.blogspot.com/2011/04/vote-for-worst-song-pick-up-lines_26.html )

I was going to post popular songs here and have readers vote on them, but truly I’m not sure any songs can compete with Train’s Drive By lyrics. It just wins, hands down as the ultimate stalker song. Don’t get me wrong.  I love the tune. It has 27 million views on Youtube and most of them are mine.  But what was Train thinking when they wrote the lyrics? Here’s how the song goes:

On the other side of a street I knew, stood a girl that looked like you. I guess that’s deja vu. But I thought this can’t be true, cause you moved to west L.A or New York or Santa Fe or wherever to get away from me.

What? Listen Train, if you have girls moving across the country in order to avoid you, this is a clear indication that you’re doing something very wrong in the romance department.

Oh but that one night was more than just right. I didn’t leave you cause I was all through. Oh I was overwhelmed, and frankly scared as h*ll, because I really fell for you.

Wait–the girl in question moved across country after only one night?  Someone was scared as h*ll and it wasn’t you. Have you checked recently to see if your photograph might be among those listed on the FBI’s  most wanted site?

Oh I swear to you, I’ll be there for you. This is not a drive by.

Just a shy guy looking for a two ply hefty bag to hold my love.

People use two ply hefty bags to hold many things–love aint one of them. Body parts, yeah, those would fit.

When you move me everything is groovy. They don’t like it sue me. Mmm the way you do me.
Oh I swear to you I’ll be there for you. This is not a drive by.

They don’t like it sue me?  Exactly how many times have people brought legal action against you for your romantic behavior?  And is the phrase “I’ll be there for you,” supposed to make the girl feel better?  Dude, she moved across the country and didn’t tell you where.  Get the hint. The last thing she wants is for you to be anywhere around.

The song goes on. Sadly the lyrics don’t get any better.  They leave the listener wanting to yell at the poor girl, “Run!  Run! Flee as fast as you can!”

So I think I’m going to have to just award Train the Enrique Award. However, I’m willing to be open minded. If you know of a popular song with worst lyrics, by all means, let me know.