The reason I haven’t updated this blog lately is not that I wanted to leave the Buy-my-new-romance-novella blog up forever. (Although you should in fact buy it because hey, it’s only 99 cents. What can you find at the dollar store that’s going to make you happier?)

The ANWA conference was Thursday-Saturday and I was busy–literally–from the moment I woke up (way too early) to the moment I fell exhausted into bed (way too late). Still, it was an AWESOME conference. Here’s some of the things I learned:

1) Don’t volunteer to introduce James Owen. Instead of reading his bio in the ANWA program, I went off the cuff and told people about him. I ended by saying, “And the best part about James is that even though he’s a bestseller, he’s still a wonderful guy!”

Which had all sorts of connotations I didn’t intend. (Apologies to my other friends who are bestsellers.)

2) Don’t volunteer to give James Owen the five-minute-til-class-is-over-sign. James has had an incredible life. He talks convincingly about the power of determination because he’s overcome so much. I would like his achievements without all of that ‘overcoming’ he had to do beforehand. I was so engrossed during his class that I completely forgot to keep track of the time. When the people in the next room suddenly started clapping, I jumped several inches in my chair and hurriedly glanced at the clock on my laptop–which made James think the class was over. He wrapped up and still had five minutes left. It probably worked out for the best though, since so many people wanted to talk to him after class.

3) I work with awesome ladies. A big conference doesn’t happen without lots and lots of help. I was so impressed and grateful for everyone who selflessly helped. 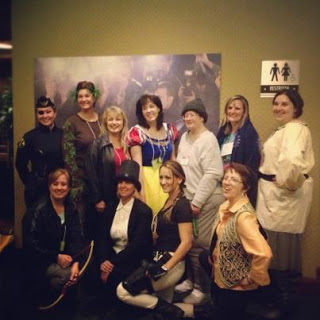 Here we are at the protagonist ball.

4)People who help out at conference win the Beginning of Book contests. The judging was completely blind/anonymous so there was no way anyone could have rigged the winners, but most of the people who won in the various categories of the BOB contest had also helped out at conference in some fashion. Are helpful people more talented? More dedicated to writing? Do you get extra creative blessings if you serve others? I have no idea, but I plan on using this phenomena to recruit helpers for next year’s conference. (And Torsha Baker who was in charge of the AV at conference got an agent from the conference. Now don’t you want to be on the conference committee?)

5) If I’m going to conduct any part of conference I need sleep beforehand. By the end of conference I was so sleep deprived I was beginning to sound and act like a drunk person. Seriously, when I introduced James for the keynote, I decided I’d better read his bio (see number 1) and I couldn’t pronounce the word ‘adaptation’. It took me three times to get it right. And did I mention that a film crew was there filming James’s speech? I’m really hoping that none of my introduction is left in. 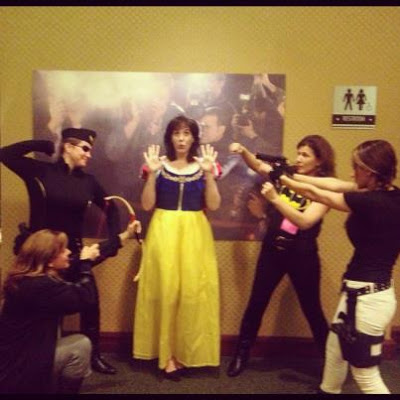 Here I am as Snow White who has wandered into the wrong film.