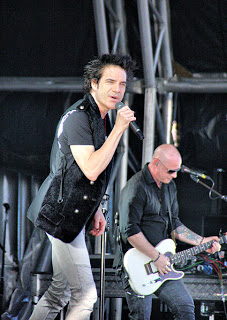 (To see the five contending songs for last years award, you can follow this link: http://janette-rallison.blogspot.com/2011/04/vote-for-worst-song-pick-up-lines_26.html

This year, Train won hands down (or wheels down, since we are talking about a vehicle) for it’s song Drive By.

In it, lead singer Patrick Monahan sounds like he’s stalking some unfortunate woman who’s greatest desire is to flee from him. She moves across the country (or at least tells him she does) in order to get away from him. Sadly, he still doesn’t get the hint.  And then there is the touching chorus where he proclaims that he is just a “shy guy looking for a two-ply Hefty bag to hold my love.”

Yeah, it’s always the quiet ones that you don’t suspect who end up being led away by the police in handcuffs after the grisly remains are found in their basement.

So in a clear attempt to redeem themselves from the I’m-not-a-danger-to-society category, Train has come up with another song called Fifty Ways to Say Goodbye.  (Catchy song, by the way. I frequently hum it.)

For Pat, saying goodbye entails coming up with fifty imaginative ways to say his girlfriend died.  Here’s a sample:

She went down in an airplane
Fried getting suntanned
Fell in a cement mixer full of quicksand
Help me, help me, I’m no good at goodbyes!
She met a shark under water
Fell and no one caught her
I returned everything I ever bought her
Help me, help me, I’m all out of lies
And ways to say you died

Yes, Patrick, I think we can all agree that you are no good at goodbyes.  Most people go with, “Let’s just be friends.” It’s a little less violent.

Note to any women who are interested in Train band members: Don’t. Just don’t even go there. It will not end well.

Note to the Feds: Check the Hefty bags. That’s where he keeps his love.

Note to people who don’t know me: I’m just joking about all of this.

Note to Patrick: Seriously, I love you . . . so you don’t ever need to like, um, come looking for me.