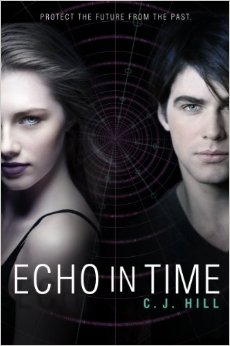 This book was a long time in the making. The first incarnation of Erasing Time was a book called Time Riders I wrote over ten years ago. I won’t go into a lot of detail about that book. I’ll just say it was basically my first draft, and had little if any editing done to it. There are words missing, words misspelled, unclear dialogue and at the climax, Sheridan’s hands are tied, then untied, then tied again. This is the literary equivalent of having your fly way, way down–like pants falling around your ankles down.

I’d planned on writing a sequel, but was so unhappy with the publisher, I decided not to. Poor Sheridan and Taylor have waited a long time for part two of their story. Thanks Harper, for picking up the book and giving it real editing!

Good things about the Echo in Time: I get to play with a time machine! Score! Every author wants to drive one of these around the block.

I got to work on two romance lines instead of just one. Two hot guys. Does it get better than that?

I got to kill people in creative 25th century ways. Not that I’m saying I killed anyone. (Hangs head. Okay. I did. Sorry.)

I get to bring people back to life. I think I should claim this privilege in all my books. I also think I should lend my time machine to JK Rowling so she can save Fred or George–whichever of the twins she killed off. I forget which, but I haven’t forgiven her for it.

Bad things about the book: Changing the Timestream sort of changes the story line in the first book. Readers, I fear, may hate me for this.  If you’re one of those readers, you have my permission to pretend it never happened.

Other bad things . . . Did I mention I kill someone off? I sort of regret that now, but I didn’t want to have to rewrite the book to change it. Plus, the death is sort of meaningful, unlike the Fred-or-was-it-George death. I didn’t mind Doby, but the twins? Come on.

If you’re in AZ, please come to the Echo in Book launch on Jan 7, 7:00 pm at Changing Hands Bookstore

(If you can’t come on that date, you can buy the book over the phone and have me sign it on that night, then pick it up later.)