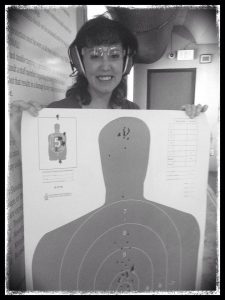 Writers are supposed to be accurate about story details. And we try. Really, I’m sure it bothered me more than anyone else when I realized that characters in Slayers went to BMI airport  instead of BWI. And to tell you the truth, I’m not sure whether the mistake was due to my dyslexia (In my mind, an M is just a W doing push-ups) or whether I thought the airport was Baltimore, Maryland International–Baltimore is in Maryland after all.

(I won’t mention other inaccuracies that have slipped by in my novels as I don’t want to start gritting my teeth . . .) But the point is, I strive to get details right. So when  my writing buddy, Torsha Baker, offered to take me to a shooting range, I thought it would be a good chance  to experience shooting a gun. After all, I have bad guys shoot at the Slayers in both books, and my characters are supposed to be excellent marksmen.

As we drove to the range, Torsha (and her buff police officer husband) gave me the safety lesson. Always assume your gun is loaded. Don’t point it at anything you don’t want to destroy. Don’t put your finger on the trigger until you’re ready to shoot.

Good advice,all. And they were rules I knew because I’d researched gun shooting and had to reread those rules every time I read Slayers revisions.

Ah, it is a frightening thing to put your life in the hands of strangers, but then I suppose we do that every time we drive a car.

The first thing I noticed as I walked into the range, is that guns are really, really loud. I had known this beforehand. I was wearing two sets of earplugs. However, I still hadn’t expected gunfire to be that loud. Imagine standing in a room where, at random intervals, several people are popping balloons next to your ear. For the first ten minutes I still jumped every time a gun fired. And a lot of guns fired. I’m sure to the people around me, I appeared to be very twitchy, or perhaps having a seizure of some sort.

The next thing I learned is that guns are really more complicated than they look on TV. You have to remember important details–like the fact that the bullets must point the right direction when you put them in the clip. And the safety? If ever there was a product that should have a clear and well written ON and OFF button, it’s a gun safety. But guns don’t have those sorts of labels. You have to remember whether that little lever is in the ON or OFF position.

Squeezing the trigger was also harder than I thought. This isn’t because I felt sorry for the paper man dangling in front of me. He was holding a paper gun in a menacing sort of way, and therefor had it coming. No, it’s hard to press a trigger because you know doing so will create a really loud noise, so you tend to wince and shut your eyes.

This is not something that leads to accurate shooting, and the paper man mocked me more than once.

That said, I put most of the bullets where they were supposed to go. So if I’m ever attacked by a stationary, rather large man while I happen to be holding someone else’s loaded gun, I’ll be a serious threat.