Have you ever noticed that an inordinate amount of Disney villains meet their doom by falling from high places? The wicked queen from Snow White was the first, but by no means the last. Gaston from Beauty and the Beast, the evil queen from Enchanted, and Mother Gothel from Tangled all bit the dust that way. Shan Yu form Mulan flew off on a rocket, so we can assume there was some falling involved with his demise as well.

Of course not all Disney villains die exactly that way. Disney likes to mix things up once in awhile. Scar from The Lion King fell and then got eaten by hyenas. The film Mega Mind started with Mega Mind falling to earth and then the movie went on to tell about his formative years and all of the events that led to his fall. I’m sure I’m missing many other Disney fallers, but according to the first website I saw after I googled the phrase: “How many films has Disney produced?” there are 318 Disney movies and one cannot be expected to remember all the grisly deaths.

Suffice it to say, falling is a popular way to end one’s existence.

What does that have to do with my recent vacation, you may ask. I’ll tell you. The Rallison clan just went to The Grand Canyon and Bryce Canyon–which is still pretty darn grand even if it doesn’t use the word in the title. Some canyons are modest that way.

Here we are smiling at the start of our trip. There are signs that tell you to be careful when you turn your back on the canyon to take pictures, as this is how most people fall in. They forget how close they are to the edge and take a step backward. We made sure we were far away from the edge. 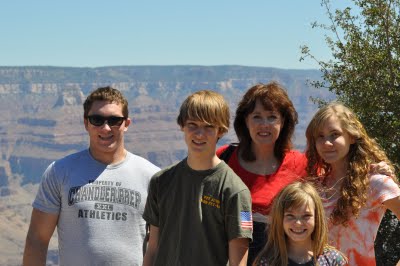 Here is a picture of what looks like my middle daughter lovingly putting her hand on her little sister’s shoulder. 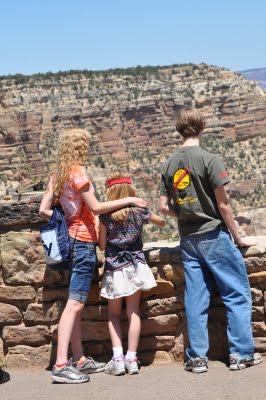 I’m pretty sure Middle Daughter is doing this as a way to make sure Youngest Daughter doesn’t do a Disney Villain and plunge off the side. Youngest daughter has no built-in fear gage and is much too daring.

At any rate, one has to watch Youngest Daughter very carefully.

So then of course the next thing we did was go horseback riding at Bryce Canyon. This was perhaps not the cautious thing to do since the last time we rode horses, Youngest Daughter’s horse bit Middle Daughter’s horse which caused a horse fight in which there was actual rodeo-like bucking. 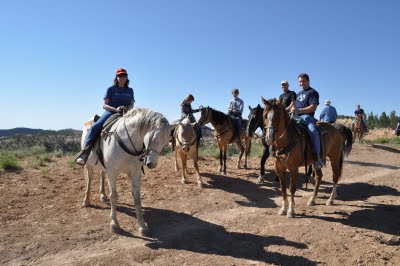 Somehow this didn’t dim Youngest Daughter’s love of horses. Middle Daughter, however, refused to go on a horseback ride anywhere near a canyon.

Here is a picture of Youngest Son by the edge of Bryce Canyon. 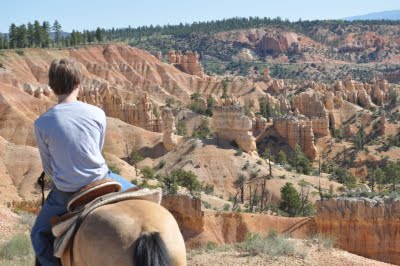 When we got to this point, I was beginning to agree with Middle Daughter about the whole horse/canyon thing, but by then it was too late. My horse went right to the edge to eat the grass growing there. 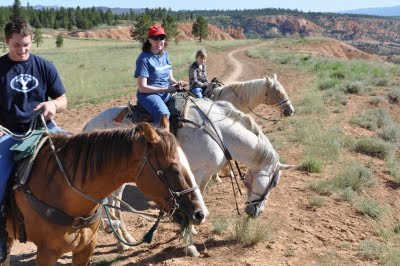 One side note about my horse: His name was Zero. I thought that was an odd name until I mounted him and he proceeded to walk around the corral putting his face into the other horses’ butts. Then I realized zero was the amount of friends he had.

So there I was on the edge of Bryce Canyon, my horse happily munching on grass, and all the other horses followed him, thus boxing him in. He turned sideways, walked a few steps, then turned his back on the Canyon.

This is when I realized that not only was I on a horse with no social skills, he couldn’t read either. It was entirely possible that he was going to take an unintentional step backward. Or one of the other horses might have been fed up with his butt-nudging antics and decided to push him over. Heaven knows, if I were one of those horses, I would have been tempted.

Which is why I was very glad that I have never been a Disney Villain.

I lived to vacation another day. 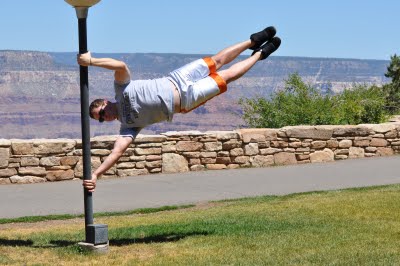 And no, this picture isn’t photoshopped. This is the sort of thing gymnasts do.