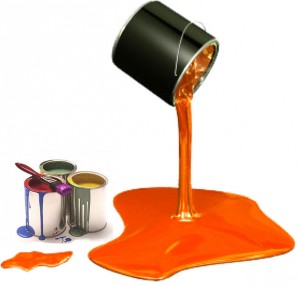 I woke up yesterday morning to youngest daughter’s announcement, “Mom, come quick! There are huge puddles of red and blue stuff in the laundry room!” I staggered out of bed, and went downstairs to find that a gallon of red paint had fallen from the shelf and now covered the floor. Along side it, was a puddle of blue laundry soap. The soap container, oddly enough, sat several feet away on the dryer. It’s still a mystery to me how a large soap puddle accumulated next to the paint on the floor. Aliens? Ghosts? The evil house cats at work?

None of the aforementioned groups was considerate enough to clean up the mess. That was left to me. Youngest daughter trotted off to school while I unrolled paper towels over the mess. I soon got red paint on the bottom of my pajamas. Not wanting to ruin them, I took them off and put them in a bucket of water. This by the way, left red footprints across the kitchen. Moments later, I realized none of my clothes were safe as long as I was dripping paint covered paper towels into a trash bag, so I took my other clothes off too.

Have you ever noticed how slippery liquid laundry detergent is? I couldn’t help but notice this fact as I stepped on it and slid around like a beginning ice skater.

It wasn’t a happy thought. But it was one that I could use in a book someday. One of my heroines will have to have a painting accident. I’m foreseeing a hot paramedic in her future.

Luckily, I didn’t fall and break anything, and the shower washed away my ax murderer appearance. The door needs to be repainted, but the floor is mostly back to normal.

Hopefully the ghosts will now find something else to do besides mess up my laundry room.