On Tuesday I was at a indie book store with my middle daughter. As we were about to leave, (I was going to go have dinner and a plot brainstorming session with awesome author, Sarah Eden) an employee came up to us and said, “I don’t mean to alarm you, but the police have blocked off the road, and I just saw armed men run into the building across the street.”

“Oh,” I said. “Well, I guess the good news is we’re in a book store.” I mean, if you’re going to be trapped in a store for an unspecified amount of time, a book store is the place to be.

My daughter and I peered out the glass door in the front of the store and saw that yes, flashing police lights were on both sides of the street, trapping my ever stylish and frequently dirty mini van in its parking space.

You may at this point be thinking that if a person knows that armed men are running around the street, the last thing she should do is go to the glass door and peer around. Taking cover behind a bookcase would be a better activity.

Yeah, I know.  Looking back, it was perhaps not the safest thing to do. But here’s the thing, there were a bunch of people standing out on the sidewalk watching the building next door like it was momentarily going to turn into a fireworks display. (Which it might have, in a sense.) One guy had even taken a chair outside and was sitting on it while he waited to see some action.

Two thoughts struck me at that time. 1) People are really stupid. 2) If I had  written a scene with gunmen running into building and told readers that a bunch of spectators came out and were waiting around to see some action, no one would have believed it. Readers expect fictional characters to act with more common sense–or at least a little self-preservation.

Which is why you can’t base fiction on real life–it’s too unbelievable.

What did I do while trapped in the book store? Using my kindle, I messaged Sarah, “I’m going to be late for dinner. I’m being held up by the police.”

The mark of a good friend is that she didn’t ask why.

While a helicopter flew overhead, I went and took this picture of myself in front of Pioneer Books’ incredible book counter. 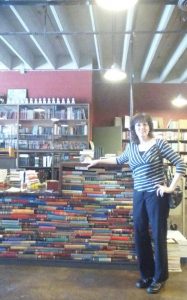 It’s made of books. I’m not sure whether it would be an honor or an insult to have my book used as a building material.

A few minutes later an employee told us that the mayor had just tweeted that everything was under control. I guess there had been a bomb threat and a suspicious man who may have had a bomb.

I went to dinner with  Sarah, we helped each other with our plots (Yay!) and now I have no more excuses not to get back to work on Slayers 3.

Oh yeah, except for this one: 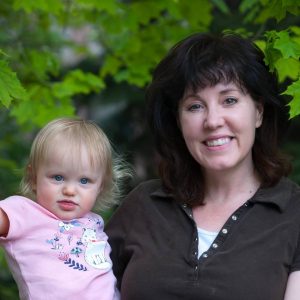