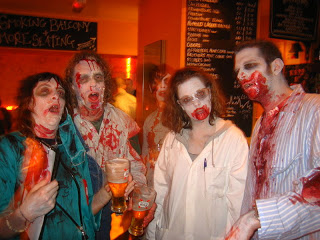 One of the fun things about writing a novel is all of the research you get to do.  Okay, it’s not all fun. For example, you don’t how long I spent on the internet trying to find out what a flash grenade would do to night vision goggles. Apparently this is the one piece of information the internet doesn’t know. I had to call Litton, the makers of night vision goggles three times trying to get someone to tell me.

The receptionist didn’t know, and the engineers didn’t return my phone calls. Finally I called a Navy Seal. He called back. End of the story–I had to cut flash grenades from the scene.

But a lot of research is more fun.  I needed to find a mall in the DC area for some characters to meet at.  My husband suggested the Springfield Mall because it was a hot spot back when he grew up in the area.  We looked at the reviews for the mall to see if it had theaters.

And I was soo glad we did.  Apparently the Springfield Mall is now “Old, decrepit, decaying, and abandoned.” (And that was from a five star review)  Here are six other actual reviews of the mall that made me laugh outloud:

1) Springfield Mall is like a shopping experience, magic show, and workout all rolled into one. You show up looking to buy something, go into a store, and when you come out the store next to it magically closed while you were shopping. This mall is dropping stores like audition week of American Idol.

To top all of that, all the stores worth shopping are at opposite ends of the mall. So you have to journey through the boarded up ghost town like it’s post apocalypse VA.

Go to this mall at your own risk! If you see something in a store BUY IT, if you leave it until you come back the WHOLE store may be gone.

2) This mall gets two stars for Dairy Queen.

Extra one star for being the best location for some sort of zombie movie.

3) I remember back in the day this mall was a respectable location . . . However, over the years it just got worse and worse until I couldn’t stand going there anymore and look at all the empty halls and dead interior; it makes me depressed since some of my best memories were going there as a kid.

P.S. Don’t park in the Parking Garage for the love of God

(That does make me wonder what goes on in the parking garage . . .)

4) Just happy to be alive and well after having to meet someone at this mall from Craigslist…I know…suspicious right?…I was buying something off of him!….noooo not THAT!…a cell phone..sheesh!
The guy was super cute…I Facebooked him and darn “info” he was…married…or I would have totally taken my chances at this empty mall….sheesh people I a just kidding!…but yeah, close this darn place! it gives you the jibby jibbeesss!

5) Hands down the greatest mall to ever grace this earth.  OK I know its more drywall than store now but there are too many good memories in this place to not give it 5 stars.
I have seen people “making love” in the back hallways, a fight between two fellows, one wielding mace and the other a screwdriver.  You have to pay for that kind of entertainment these days.
Too much hate and not enough love for this mall, I hope it never gets torn down.
6) Ahhh, the mall that time forgot.  They will put up drywall in front of a storefront faster than anything I’ve ever seen.  I truly believe that magic drywall elves come out at night to board up where stores used to be.  I picture them singing some sort of song while they do it too…
But I digress…
Mall Positives:
– Not at all crowded
– Decent parking options
– Target is well stocked
– JCPenney has a decent selection
– Kiosk coffee place (Cuppy’s) on first floor has good coffee
Mall Negatives:
– Over half the spaces are not used
– Odd Macy’s there
– Oddly placed foodcourt
– A bit frightened of the drywall elves
Needless to say, I sent my characters to a different mall instead.  But if I ever write a story about the Zombie Apocalypse or a tribe of drywall elves, I’ve got the perfect setting. . .